Increasing Societal resilience through Joint Response : Analysing the quality of interoperability and cooperation during multidisciplinary response to violent attacks in Finland 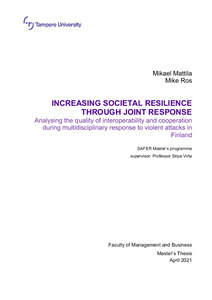 During the last two decades, marauding violent attacks towards the general public in Finland have been rare. Even until recently, these incidents were considered plausible, but not probable threats. However, in the last ten to fifteen years, Finland has experienced several of such tragic incidents. Official investigation reports on those incidents stated that the interoperability and cooperation of the responding organisations was not efficient enough. The main agencies involved in response actions were the police and the emergency services.

During the era of rising extremist threats, this thesis aims to identify possible models for multidisciplinary response and identify the current gaps in the joint approach in use. Data for this thesis was collected from known leadership and cooperation theories to form a base of understanding what elements are critical for successful cooperation. Experts from both the police and the emergency services were interviewed to create and map the current models for cooperation while responding to marauding violent attacks. This model was then referred to similar existing models from similar operational cultures in Europe. Based on those references, and the theoretical framework, topics of development were presented. It is the conclusion of this research that there is currently no comprehensive model for multidisciplinary response to marauding violent attacks in Finland. A framework for future development is proposed in the results and the conclusions of this thesis and it is stated that based on those findings, future development should be carried out.