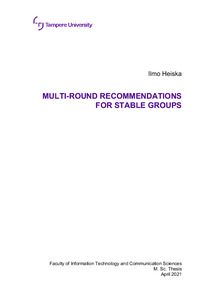 The experimental results show that the two novel methods exceed the performance of the baseline method in all scenarios. Of the two novel methods, adjusted average method outperforms average-min-disagreement method in the early stages of the multi-round recommendation sequence. Average-min-disagreement method, on the other hand, achieves better overall results in the later stages of the multi-round recommendation sequence. Additionally, the average-min- disagreement method achieves the most fair results for all group members in all scenarios.