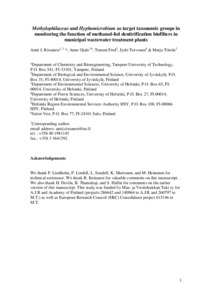 Molecular monitoring of bacterial communities can explain and predict the stability of bioprocesses in varying physicochemical conditions. To study methanol-fed denitrification biofilters of municipal wastewater treatment plants, bacterial communities of two full-scale biofilters were compared through fingerprinting and sequencing of the 16S rRNA genes. Additionally, 16S rRNA gene fingerprinting was used for 10-week temporal monitoring of the bacterial community in one of the biofilters. Combining the data with previous study results, the family Methylophilaceae and genus Hyphomicrobium were determined as suitable target groups for monitoring. An increase in the relative abundance of Hyphomicrobium-related biomarkers occurred simultaneously with increases in water flow, NO x(-) load, and methanol addition, as well as a higher denitrification rate, although the dominating biomarkers linked to Methylophilaceae showed an opposite pattern. The results indicate that during increased loading, stability of the bioprocess is maintained by selection of more efficient denitrifier populations, and this progress can be analyzed using simple molecular fingerprinting.