Preliminary data on the content of fermentable oligo-, di- and monosaccharides and polyols (FODMAPs) in typical Finnish produce: The Nordic application of the low FODMAP diet 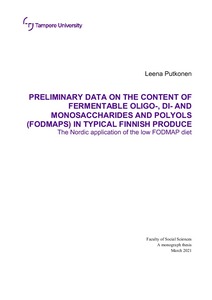 Irritable bowel syndrome (IBS) is a disease involving the dysfunction of the the brain-gut-gut microbiota – axis, causing symptoms such as altered bowel habits, abdominal pain, bloating, fatigue and anxiety. Its prevalence globally is 10 percent. There is no cure, but symptoms can be managed with pharmacological, psychological and lifestyle and dietary measures. The most used dietary treatment is a diet that limits the intake of poorly absorbed carbohydrates that are easily fermented in the gut, hence, alleviating typical gut symptoms of IBS. This low FODMAP diet has been shown in clinical trials to alleviate symptoms in up to 70 percent of IBS patients. FODMAP stands for Fermentable Oligo-, Di- and Monosaccharides And Polyols.

Samples were collected in Finland and taken to Australia, where they were processed and analysed using high-performance liquid chromatography and fructan assay at Monash University in Melbourne, Australia. The data were then further processed into tables and figures indicating the FODMAP content of products per 100 g and per portions. It was further evaluated, if the foods per 100 g or per portion passed the low FODMAP criteria that is used to evaluate whether foods are suitable on the low FODMAP diet.

As the sampling procedure could not be adhered to in detail, the findings of this study should be regarded as preliminary and generalisations should be done with caution. Based on the results of this study, people on the low FODMAP diet can add lingonberry, bilberry and some oat bread, and biscuits and spelt porridge to their diet. Some foods, like sea buckthorn and wild cranberries, can also be included in the diet in small amounts. Most grain products were high in FODMAPs, but further studies are needed due to variability of findings.