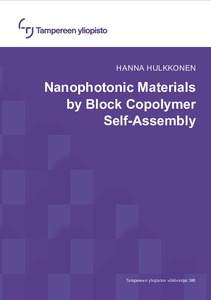 Nano- and microstructures are the core building blocks of modern-day devices such as phones, cameras, solar cells and lasers. Development of nanofabrication methods is essential if we want to continuously achieve smaller, faster and more sophisticated devices. The self-assembly of molecules is a promising scalable and low-cost nanopatterning method. Block copolymers are large molecules that can, under the correct conditions, self-organize into well-defined 2D and 3D patterns. The patterns can then be used to create functional nanoscale devices. In this thesis the prospects of block copolymer lithography for the fabrication of nanophotonic materials are explored.

The thesis focuses on the self-assembly and use of polystyrene–polyvinylpyridines (PS–PVP). The work describes the development of a solvent vapour annealing device that uses a novel type of feedback control to manipulate the swelling of the polymer films for a more repeatable annealing process. The solvent annealing device is one of the most precise systems demonstrated so far. It is also the only one with a control mechanism fast enough to enable cyclic annealing. It is shown that high-molecular weight PS–PVP can be made to self-assemble into nanopatterns in less than 10 min as opposed to the usual timescale of hours.

The produced polymer nanopatterns are utilized in the fabrication of mesoporous silicon that has tunable optical properties. It is possible to control the pore size, and consequently the effective refractive index of the material, in a straightforward plasma etching process during pattern transfer. The method could be used to create thin films that have tunable or ultra-low refractive indices. Finally, block copolymer lithography is combined with a template-stripping process to create patterned gold metasurfaces. The fabricated sub-wavelength nanodome arrays exhibit omnidirectional, broadband, perfect absorption of visible light. According to simulations, the light absorption and the electric field enhancement arise from localized surface plasmon and gap plasmon resonances in the material. The plasmonic coatings could be exploited in emerging energy-harvesting applications or in high-sensitivity optical sensors.