"It's only divisive when you physicalize it" : The visibility of the border in Ireland during the Brexit negotiation period 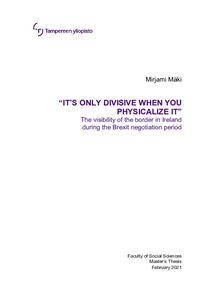 After the United Kingdom voted to leave the European Union on June 23, 2016, one of the most pressing concerns has been over Northern Ireland, and the land border that divides the island of Ireland between Northern Ireland and the Republic of Ireland. After the 1998 Peace Agreement, which ended the period of time known as ‘Troubles’, the border disappeared from view, which scholarly has considered to be one of the major successes of the Agreement. If the border in Ireland becomes “EU’s Western Wall”, it seems unlikely that the border could remain the same.
Because the fate of the border remains unclear, this research focuses on the Brexit negotiation period of June 23, 2016–January 31, 2020, and seeks to understand how the border in Ireland has become more visible during that time period. The analysis of the border’s visibility has been divided into three sections, which look at the visibility of the border as a physical divider, a connective space and something that is performed.
The research concludes that the border has become visible in all three ways, but the most visible aspect of the border has been the everyday dimension of it, which consists of the reality of the border to those who live near it, and whose lives have always been shaped by the presence of the border, and having to navigate it as a part of their daily lives. There is then a major drift between the idea of Brexit, which aims to control the borders of the UK, and the lives of local communities who have always had the right to belong to the border and shared it as a space, and wish to also do in the future.