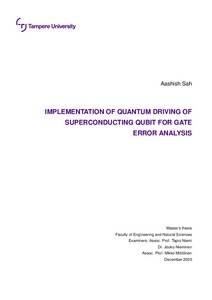 Quantum computers possesses an inherent parallelism that allows for an exponential speedup in carrying out certain tasks compared to classical computers. Superconducting-circuit, a promis- ing candidate for the physical implementation of a qubit from a non-linear LC oscillator, where the nonlinearity is introduced by the Josephson junction. The state of the qubit is controlled by a single-mode electromagnetic field, which is stored in a coplanar waveguide resonator. Con- sequently, desired gate operation can be performed on the qubit by applying microwave pulse through the drive resonator for a certain interaction time. The quality of the gate operation, mea- sured by the gate error, depends on the properties of the microwave pulse such as amplitude, phase and interaction time.

In this thesis, we focus on improving the error from the Pauli-X gate operation by optimizing the drive state of the resonator. Traditionally, a classical drive is used to implement the Pauli-X gate rotation. Alternatively, we propose a quantum driving of the qubit, where the description of the classical field is replaced by the quantum approximation of the classical field, namely, coherent drive state. A coherent state is characterized by the average photon number n ̄, thus we investi- gate a relationship between average photon number and the performance of the gate operation, numerically and experimentally.

For quantum driving experiments, we design a superconducting-circuit with a qubit–resonator coupling of g/2π = 7.5 MHz. The experimental characterization of the sample yields a enhanced qubit lifetime T1 ∼ 26 μs and dephasing time T2 ∼ 5 μs. Furthermore, a photon number cal- ibration is carried out using power spectroscopy of the qubit. The results of photon calibration measurement are essential for the implementation of the full gate operation protocol, which will be conducted in the future.