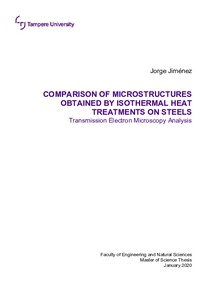 Steels are one of the most used materials in the world. Iron has been studied since it was used for the first time, and yet there are many questions unsolved. Bainite, a microstructure that is neither perlite nor martensite, is one of the most conspicuous examples. Although now there is indication that the transformation by which it is formed is displacive, it has been topic of discussion for decades.
In this work, the focus will be on the effect of the heat treatment on carbon distribution, in-cluding carbon compounds precipitation, and the accommodation of strain associated to the bainitic and martensitic transformations. In order to achieve this, we have compared the micro-structures resulting from different isothermal heat treatments: quenching and tempering, and austempering, respectively.
A high-carbon, high-silicon steel (0.66C-1.45Si-1.35Mn-1.02Cr wt%) was selected and heat treated. Isothermal temperature treatments were 200ºC in both cases, quenching and tempering consisted of austenization at 900ºC, quenching to room temperature, and tempering at 200º; austempering consisted of a similar austenization, but partial quenching to 200ºC directly, avoiding complete cooling of the sample.
The characterization included X-Ray Diffraction and Transmission Electron Microscopy. XRD was used to determine lattice parameters, volume fraction of the phases and microstrain overall the sample. TEM, on the other hand, allowed characterization of the microstructure and phases at microscale.
Results showed higher carbon distribution ferrite in the martensitic samples than in the bainitic ones. In bainites, carbon can partition during the transformation, stabilize the austenite leading to higher volume fraction of this phase than in martensite microstructure. In addition, carbon precipitation is finer in bainite than in martensite. Findings included new evidence of carbon clustering of Fe16C2 in martensitic ferrite.