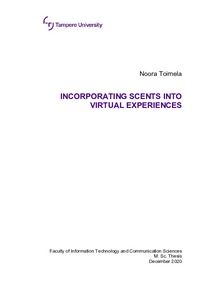 The present aim was to investigate the effects of odor congruency and dynamism on recall of objects encountered in a virtual reality (VR). The effects on emotional responses were also investigated. First, participants (N=8) interacted in a maze-like VR environment with 12 virtual 3D objects. Eight of the objects had a scent, and half of the participants received objects where the scent was static, half objects where it was dynamic. In the dynamically scented objects the intensity of the odor changed according to the interaction so that the closer the virtual object was to the user the stronger was its odor. The congruency of objects and odors were also varied so that some objects had a semantically congruent odor and some had an incongruent odor. Following this the participants were to list as many encountered objects as they could. After this, the participants interacted again with the same stimuli and rated their experiences in terms of emotion related valence and arousal.