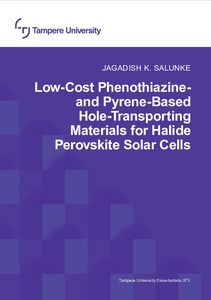 Organic-inorganic halide perovskite solar cells (PSCs) show great potential for energy applications due to their excellent power conversion efficiency that dramatically increased from 3.8 % to over 25% in just a decade of research. The performance of PSCs is strongly influenced by the charge-transporting (electron and hole) layers. Currently, most of the high-performing PSCs use 2,2’,7,7’-tetrakis-(N,N’-di-p- methoxyphenylamine)-9,9’-spirobifluorene) (Spiro-OMeTAD) or polytriarylamine (PTAA) as hole-transporting materials (HTMs). However, Spiro-OMeTAD and PTAA suffer from several drawbacks, such as extremely high cost, difficult and multistep synthesis and purification, and low hole mobility and conductivity, thus requiring the use of additional chemical dopants. The addition of dopants not only decreases the device stability but also increases the complexity of device fabrication. Considering all the above-mentioned drawbacks it is highly desirable to design alternative HTMs to simplify the fabrication of PSCs and ensure their industrial-scale application.

This work investigates the molecular design, synthesis, and application of phenothiazine- and pyrene-core organic small molecule-based HTMs for efficient and stable PSCs. Ullman and Suzuki coupling reactions, as well as simple condensation reactions, were used to synthesize the HTMs. The optical and electrochemical properties of the HTMs were tuned by the introduction of electron donor and acceptor groups to the parent materials. The newly synthesized HTMs exhibited excellent interactions with the perovskite surface. The azomethine HTMs led to PSCs with a power conversion efficiency of up to 14% and with high stability, environmentally friendly synthesis, and very low cost (~ 10$/g). The optical and electrochemical properties of the pyrene-core HTMs, as well as the performance of corresponding PSCs, were tuned by an effective fluorination strategy.

We believe that the molecular designs presented in this work will provide useful know-how to significantly enhance the stability and the performance of PSCs, thus bringing them closer to commercialization. In particular, our focus has been on developing material with cost-efficient synthesis and minimal environmental impact.