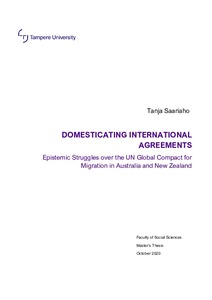 The purpose of this thesis is to examine how national negotiation processes through which a world model becomes domesticated into local contexts unfold at the level of value-based rhetoric. As a case in point, this thesis examines how the United Nations (UN) Global Compact for Safe, Orderly and Regular Migration (GCM) has been domesticated in the national contexts of two traditional migrant-receiving states, Australia and New Zealand. The focus is on the initial stages of domestication, and on the values and moral principles that actors used in their argumentation about the desirability of adopting the compact.

The data used in this thesis included the GCM-related reporting, interviews, and debates in the mass news media in Australia and New Zealand. The method of data analysis was rhetorical analysis. This thesis examined how different actors argued for or against the GCM, as well as the distinct values and moral principles evoked, whilst actors sought to safeguard their own distinct political interests in the domestic migration debate. The chosen sources of data were the newspaper The Australian, and the news websites 9news.com.au, news.com.au, and abc.net.au for Australia. In the context of New Zealand, the data were derived from the newspaper NZ Herald, and the news websites stuff.co.nz, newshub.co.nz, and tvnz.co.nz. Altogether, 62 different news sources were included in the dataset.

The findings show that different actors shared similar values and moral principles which they used differently to strengthen their arguments. At the same time, some actors struggled to appear as legitimate at the crossroads of various world cultural values. The common values often referred to by different speakers included state sovereignty, national identity, rationality, accountability, compassion, and universal human rights. Overall, the findings evince that even though different actors agree on the principles under which migration should be governed, they disagree on how these principles should be actualized, because they encounter contradictory world cultural values that are highly institutionalized around the globe. Differences in local sociopolitical realities influence whether, and to what extent, the migration compact becomes decoupled in practice, explicating why the GCM was adopted in New Zealand but not in Australia.