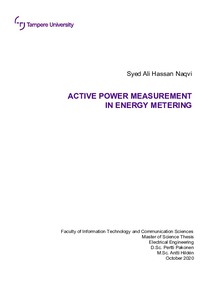 The monitoring and measuring of harmonics in electrical networks are becoming important with the increase of distributed generation, non-linear devices like converters and developing electricity markets. Measuring voltage and current harmonics will help us mitigate the adverse effects they can cause in the electrical networks. In this thesis measurements of a pilot building are utilized to analyse the effects of active power distortion by monitoring the active power and harmonic behaviour of the pilot building. Active power distortion can cause error in billing and there is a need to quantify harmonic active power.
Over the years various power definitions have been developed to include the effect of harmonic distortion in the metering. There are many studies available that include the effect of harmonic reactive power, but very limited data is available that describes the effect of harmonic active power on electrical energy. This thesis discusses smart meters and their advantages, some of the functionalities of modern smart meters and a standard is discussed which is relevant for measuring fundamental frequency and harmonic frequencies power.
The analysis of this thesis is focuses on the difference between total and fundamental frequency active powers and the sources of the harmonics that cause this difference of power in a pilot building. The difference is analysed in 1-second and 1-minute time intervals for different loads of the building to see the behaviour of the loads. The effect of this difference is utilized to find the energy difference it causes on each phase on the main distribution boards. The energy difference at two main distribution board shows that difference can be negative or positive that means some of the loads produce harmonics and some loads absorb harmonics. The difference of magnitude was less than 1% at both the distribution board of the pilot building. It was observed that non-linear loads generate more difference in energy. This difference of result can cause an effect on billing of active power if the effect of harmonic active power is not considered.