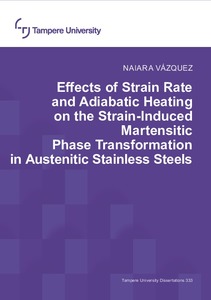 Strain induced martensitic transformation is being exploited in many civil and military applications to increase both the strength and plasticity of steels. In particular, the so-called transformation induced plasticity, or the TRIP effect, delays strain localization to larger plastic strains, and therefore effectively improves the formability and energy absorption capability of the steel. The modern TRIP steels include low alloy multiphase steels but also highly alloyed stainless steels. In either case, the microplasticity of the steel becomes highly complex as its microstructure continuously changes with increasing plastic deformation. This, in turn, can lead to peculiar mechanical response of the material, such as very high strain hardening rate but at the same time low or even negative strain rate sensitivity and its complex temperature dependence. The work presented in this thesis focuses on separating and quantifying the effects of adiabatic heating and strain rate on the strain induced phase transformation. This problem has been addressed with various carefully designed experiments at different combinations of temperature and strain rate. The amount of deformation-induced adiabatic heating in austenitic stainless steels was evaluated by measurements of the Taylor-Quinney coefficient in tensile tests conducted in a wide range of strain rates and by making use of high-speed optical and infrared photography. It was shown that the Taylor-Quinney coefficient for the stable austenitic steel AISI 316 varies between 0.5 and 0.6, whereas for the metastable AISI 301 steel the Taylor-Quinney coefficient is much higher and varies between 0.7 and 0.95 depending notably on strain and strain rate. It was shown that the exothermic phase transformation in the metastable austenite has a significant effect on the experimentally determined Taylor-Quinney coefficient, which is why it maybe should be called ‘apparent Taylor-Quinney coefficient’ in such cases. The phase volume fractions and the microstructures of the specimens deformed to different amounts of plastic strain were analyzed using microscopy, electron back scatter diffraction, and magnetic balance measurements. The results show that the effects of strain rate and adiabatic heating on the phase transformation rate can be separated and that the strain rate itself has a noticeable effect on the nucleation and formation of the strain induced α’-martensite in stainless steels. In fact, it was shown that the effects of the bulk adiabatic heating on the stacking fault energy and phase transformation rate are only modest before necking. However, the electron back scatter diffraction measurements showed that at low strain rates, where the deformation conditions are more or less isothermal, the martensite nucleation occurs in two favorable variants, whereas at high strain rate (adiabatic) conditions, the nucleation tends to concentrate almost solely to the most favorable variant. As, however, the phase transformation is a very local phenomenon, it is suggested that future research concerning the effects of adiabatic heating should address the effects of local heating at the grain level.