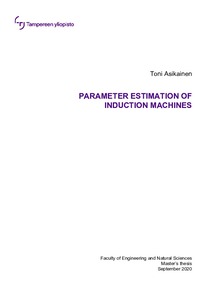 The goal of this thesis is twofold, namely, the derivation of an accurate discrete-time model of an induction machine which is subsequently used by estimation algorithm for the online estimation of the parameters of the system in question. Regarding the parameters of the system, the stator and rotor angular frequencies vary during operation which makes the model time-varying. Moreover, the values of the inductances vary due to the phenomena such as saturation, while the thermal heating causes varying resistances. Therefore, the continuous-time model must be discretized at each sampling interval which sets a limit on the computational load on the method considering the online estimation setting. The used method in the parameter estimation is based on an approximation of the Cayley-Hamilton theorem. It was found out to perform better compared to commonly used methods such as the forward Euler or trapezoidal method considering both the accuracy and stability of the discrete-time model.
The method used for the parameter estimation is the recursive prediction error method. It uses the measured and predicted output primarily to form the parameter estimation at each recursion. In this thesis the state-space model approach was used which allows, for example, use of the Kalman filter to predict the output. It provides a more accurate state and parameter estimation compared to the output error approach where the system model is solely used for the prediction. However, the increased accuracy introduces larger computational load and complexity of the algorithm. Numerical stability of the method was considered by testing multiple parameter covariance update methods to ensure stable performance with large data sets. Moreover, an orthogonal square root Kalman filter is adapted which provides better numerical conditioning of the Kalman filter covariance matrices and higher accuracy.
The parameter estimation was conducted using two types of data sets. The parameter estimates tracked well the true parameters when the data set obtained from both a constant and time-varying parameterized simulator model were used. Following, real-world measurements were used to validate the method. The obtained parameter estimates were less accurate, most notably due to the increased sampling interval and unmodeled dynamics and delays in the data set. To mitigate this, a thermal model of the resistance that utilizes the measured temperature was used to reduce the number of time-varying parameters. However, the estimation outcome did not improve significantly but it appears to have better potential.