On Sulfuric Acid and Nanocluster Formation in Vehicle Exhaust 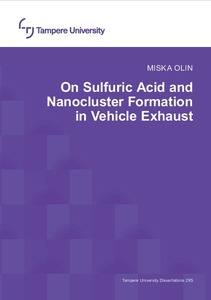 Particles existing in the atmosphere have effects on human health, climate, and visibility. The sources of airborne particles include both biogenic and anthropogenic sources. One of the main sources is direct emissions from traffic, but new particles are formed also in the atmosphere from nucleating precursor vapors.

Sulfuric acid is perhaps the most important gaseous compound involved in new particle formation occurring in the atmosphere and in vehicle exhaust. It is formed via photochemistry in the atmosphere but is also formed in the exhaust systems of vehicles. It has been shown to correlate with nucleation rate, i.e., the formation rate of new critical clusters capable of growing to larger particle sizes. Several nucleation mechanisms exists but the exact mechanism occurring in vehicle exhaust has not been resolved yet.

Determining the nucleation rates in vehicle exhaust in this thesis involves laboratory experiments and computational simulations outputting the nucleation rates inversely using the experimental data. An aerosol model was first developed for this purpose and was further improved to a more generalized model later. The generalized model includes an important improvement for representing particle size distributions efficiently even though they are not in a trivial log-normal form using a combined power law and log-normal size distribution model, developed in this thesis. The obtained nucleation exponent for sulfuric acid is 1.9, which corresponds best with the kinetic nucleation theory, but other compounds existing in real vehicle exhaust, such as hydrocarbons, seem to have an important role in nucleation too. The obtained nucleation rate function also provides information on the effects of water and temperature on nucleation and a starting point in examining the effects of the other compounds in more detail.