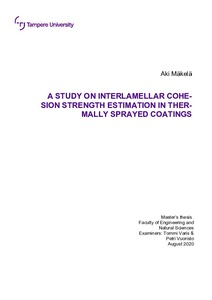 The purpose of this thesis is to examine and present various methods of measuring or estimating cohesion strength in thermally sprayed coatings. NiCrBSi and NiCr coatings were studied. Additionally, Fe12V coatings were included in cavitation erosion testing. Research was done by first gathering information of known testing methods and thermal spray processes. Methods such as TAT, TCT, cavitation erosion testing and several others are presented. Cavitation erosion and tensile testing were chosen for further experimentation to evaluate them as testing methods.
Performed experiments found potential in both testing methods but optimization, particularly in the case of tensile testing, is recommended. Several samples failed during preparation and the procedure requires improvement. Further sample failure was encountered in testing and the limited number of samples affects the reliability of results. Additional research with larger number of samples could prove beneficial in supporting achieved results.
Both NiCrBSi and NiCr maintained higher stress-strain curve slopes with HVAF sprayed coatings as compared to HVOF and APS coatings. In the case of NiCr HVOF coatings came close to surpassing HVAF. Results for APS NiCrBSi coating implied significantly poorer cohesion properties. Cavitation erosion testing results showed NiCrBSi HVAF to outperform HVOF. In the case of NiCr HVAF performed somewhat poorer than HVOF. Similar result was observed with Fe12V coatings but the difference between methods was greater. Higher substrate temperature during spraying was found to improve the acquired cavitation erosion results. Overall HVAF outperformed others in NiCrBSi coatings, but HVAF and HVOF were practically equal with NiCr coatings and Fe12V coatings performed the best with HVOF spraying. The cavitation results of HVAF sprayed Fe12V and NiCrBSi coatings may have suffered from the fact that the powder size distribution was slightly too coarse for the HVAF.