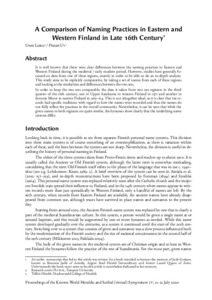 It is well known that there were clear differences between the naming practices in Eastern and Western Finland during the medieval / early modern period. However, studies have generally focussed on data from one of these regions, mainly in order to be able to do an in-depth analysis. This study aims to be explicitly comparative, by taking a set of names from each of these regions and looking at the similarities and differences between the two sets.

In order to keep the two sets comparable, the data is taken from two tax registers in the third quarter of the 16th century, one in Upper Satakunta in western Finland in 1571 and another in Savonia Minor in eastern Finland in 1562–64. This is not altogether ideal, as it is clear that tax records had specific traditions with regard to how the names were recorded and thus the names do not fully reflect the practices in the overall community. Nevertheless, it can be seen that while the given names in both registers are quite similar, the bynames show clearly that the underlying name systems differ.