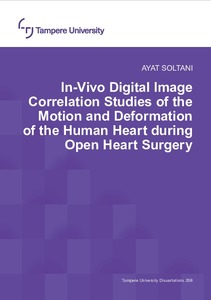 It has been well established that the functioning of the heart is directly related to its deformation. Consequently, any problem experienced by the heart during its operation manifests itself as a change in its deformation. In the studies of the mechanical behavior of materials and structures, the deformation is usually expressed and analyzed using the concepts of strain and strain rate. Various methods based on the echocardiography techniques have been developed and expanded to study the deformation of the heart by measuring the momentary values of these variables. These methods include, in particular, Tissue Doppler Imaging (TDI) and Speckle Tracking Echocardiography (STE), both with their own sets of shortcomings and advantages. One of the more unexplored aspects of the function of the heart is the deformation of the right ventricle (RV), either because of the limitations of the echocardiography methods, or the lack of research dedicated to this section of the heart. The main objective of this thesis is to develop new methodology based on the Digital Image Correlation (DIC) technique to record and analyze the deformation of the RV during different stages of an open heart surgery. This task is possible because the RV is visible and physically accessible during the surgery. After recording of the images and the following image analysis, the strain and strain rate measured using DIC were compared to the corresponding values acquired from STE. Additionally, various other values describing the deformation were obtained from the DIC analysis, such as the principal strain and the length of the displacement vector. The absolute strain and strain rate data obtained with the DIC and the STE do not compare exactly, which was to be somewhat expected as the two methods observe the heart from opposite directions. However, the relative changes in the strain and deformation quantities during the operation or before and after the surgical repairs are much more comparable.

The difference in the values obtained from these two methods can be explained by the fact that the location of the measurements are not exactly the same, as DIC measures the top surface of the heart and the STE observes the movement and deformation from below. Also this work demonstrates that deformation of the heart can be highly anisotropic and localized, and therefore, the absolute values of strain or other quantities depend strongly on the location from where the values were obtained. DIC can provide full field deformation data to describe the anisotropy and the strains at high spatial resolution, but this data is not easy to interpret quantitatively, and is therefore not very suitable for clinical work.

Consequently, a method based on the orthogonal decomposition was used to simplify the full field deformation heat map images (acquired from the DIC analysis) to numerical values, and to reduce the quantitative strain and deformation information of the full field image into a single number using shape descriptors. The difference in the deformation data contained in any two deformation heat map images can be numerically presented as the Euclidian distance between the two shape descriptor vectors of the corresponding images. This method can be used to describe the deformation of the RV in a more comprehensive manner, to compare the deformation between the different stages of the surgery, and to study any changes that might occur during the entire operation. The method output is a single number that could be used as an index to describe the mechanical function of the heart and to indicate changes and effect of, for example, medication administered to the patient during the operation.