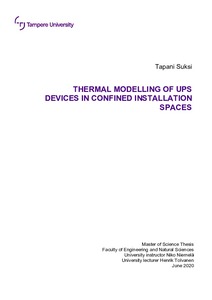 Ympäristö- ja energiatekniikan DI-tutkinto-ohjelma - Degree Programme in Environmental and Energy Engineering, MSc (Tech)
Tekniikan ja luonnontieteiden tiedekunta - Faculty of Engineering and Natural Sciences
This publication is copyrighted. You may download, display and print it for Your own personal use. Commercial use is prohibited.

The objective of this master’s thesis is to determine, how confined installation spaces influence the thermal operating conditions of large-scale Uninterruptible Power Supply devices (UPSs). The UPSs include electronic components, which are continuously designed smaller. While the component area decreases power density increases, which is challenging for thermal designing, as it leads to temperature increase in electronic components. These temperatures depend significantly on the operating conditions. Regarding the component temperatures, large installation spaces are usually favorable. Conversely, customers want to save total footprint, because space savings are typically both financially and practically beneficial. Hence, knowing the optimal installation conditions is desirable.

To better guide the customers with installation issues, the company that issued this topic needed an easy-to-use tool, which could be used to evaluate, whether a UPS would endure the given installation conditions. The tool’s calculations were based on fan operation and heat transfer through a heatsink. In order to create the tool, which predicts the semiconductor temperatures realistically, thermal tests were performed and CFD models were created.

The thermal tests were made to a UPS prototype. These tests were performed by building an enclosure around the UPS to capture, how different clearances influence on the UPS component temperatures in confined installation spaces. Based on the test results and other available information, two simulation models were created, one for a prototype and another for a product that was already on the market. The simulation models were made using Ansys Icepak software, which is suitable for thermal modelling of electronic components.

The thermal test results showed that the rear and side clearances had a notable impact on the most critical component temperatures, while the top clearance’s influence seemed to be minor. The rear clearance had especially influence on the fan operating point, which determined the provided cooling airflow. Using the thermal test results and performing preliminary simulations, the temperature and velocity boundary conditions of the simulation models were created as a function of operating power. Finally, the tool was optimized to predict the semiconductor temperatures realistically based on the test and simulation results, and user manual suggestions for both products were made.