About time: Sámi concept of time in a Finnish curriculum 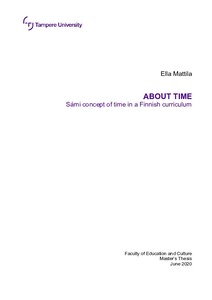 This thesis examines how the cyclical conception of time characteristic of Sámi culture is supported or, respectively, how it is limited in the Finnish curriculum traditionally based on linear views. The research data is formed from the curriculum of Pasila Primary School and the aim is to reveal the negotiation and validation of different time-concepts by Foucauldian discourse analysis. The analysis finds that Sámi cyclical time is unmet in the curriculum in ways that can be divided into three discursive themes. Most dominantly the curriculum contains assumptions of linear time and learning, which impede the cyclical construction of time and the Sámi students’ connection to the customs of their own culture. Linearity is intertwined in the Finnish curriculum structures. However, the curriculum also offers some meanings that can be interpreted to make room for cyclical conceptions. A conscious teacher can implement teaching that recognizes more diverse concepts based on these connotations, albeit still within the constraints of linear baseline. The analysis also found statements showing general respect for flexibility and diversity that do not take a concrete position on school structures. The conclusion from these findings is that the remains of long-term colonization and assimilation of the Sámi are still visible in the dominant positioning of the mainstream culture’s perspective and the marginalization of Sámi consideration. Even though the growing international appreciation of multiculturalism has been seemingly linked to Finnish education policy, the curriculum has not been fundamentally changed to negotiate with diverse conceptions.