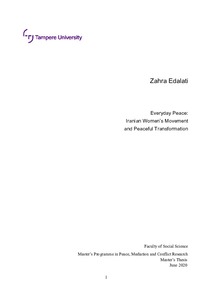 Master's Degree Programme in Peace, Mediation and Conflict Research
Yhteiskuntatieteiden tiedekunta - Faculty of Social Sciences
This publication is copyrighted. You may download, display and print it for Your own personal use. Commercial use is prohibited.

Women's life and rights in Iran have encountered several challenges, and Iranian women have made considerable efforts to transform society and increase gender sensitivity in times of patriarchal rules and culture. This thesis sheds light on how Iranian women’s movement and women resisting models have sought to transform society. The research approaches the topic from the perspective of peace and conflict studies and through the studies that deal with slow peace, bottom-up peace building, and conflict transformation theories. The analysis of this research begins by discussing the forms of women’s activism through feminist discourses and observes how women’s movements have emerged locally and historically. It then turns to the models and strategies through which women have been resisting and transforming from one form of identity to another, at the same time, transforming society through their bottom-up activities.
The data of this research comes from nine narrative interviews with different members of the women’s movement who are living in Iran. The data is analyzed by using narrative analysis tools and classifying narrations to different themes. The findings show that these women focus on changing the discriminative interpretations and male-centered readings of Islamic laws and regulations. Iranian women challenge armed patriarchy by their unique strategies such as bargaining with patriarchy. They challenge the political system at a slow pace and with their lights off. These women contribute to the process of resisting and transforming society regardless of their political and religious backgrounds, ideology, and social class.
Moreover, women activists attach a positive value to family, motherhood, femininity, and what they view as stereotypes while they ask for changes in patriarchal laws. They do not see religion itself as a source of restrictions but rather the interpretations of religious texts and patriarchal culture, which result in unacceptable gender relations. Accordingly, this thesis expands the notions of patriarchy in the context of religion and culture. This thesis concludes by suggesting that women's unity is a crucial issue within the Iranian women's movement. According to the findings of this thesis, Iranian women’s rights activists from different backgrounds need to shape their unity to make changes in patriarchal rules and to increase gender sensitivity in society.