Frames of Digital Divide in Digitalization Policies in Finland, Denmark and Sweden and the Legitimacy of the Implementing Agency 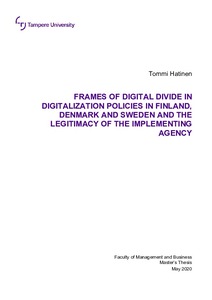 The process whereby digital technologies are integrated to everyday functions of the lives of citizens is commonly referred to as digitalization. While the benefits of utilization of technology are undeniable and manifold, digitalization also causes inequality in society. Digital divide is the academic concept that originally referred to the gap between those who have access to technology and those who do not, but nowadays it is understood as a wider phenomenon that encompasses various inequalities brought about by digitalization. Nordic countries are at the forefront in taking advantage of new technological opportunities, but also for these welfare states digital divide is a concern and governments have recently assumed responsibility for mitigating it. Given that the problem is not new and there is an established group of actors in each country that already have been helping citizens with digitalization related issues, a question worth asking is whether governmental actors that have been assigned with the task of coordinating these efforts have gained legitimacy in their role. This thesis seeks to answer this question for Finland, Denmark and Sweden and compare outcomes in these three countries.

Theoretically the research revolves around the concepts of organizational legitimacy and policy framing. Legitimacy is understood through the concepts of pragmatic legitimacy and the process of democratic legitimation, which is seen to consist of input, output and throughput legitimacy. Policy framing is understood as a relationship between a policymaker and the grassroot level operators, whereby the official policy documentation represents the frames in communication and the perceptions of the grassroot level informants’ frames in thought. The thesis discusses legitimacy of central agencies in coordinating the digital divide mitigation efforts according to comparative public administration (CPA) tradition. The research is qualitative in nature and utilizes both primary and secondary data. Digitalization strategies of the three countries are analyzed with theory-driven content analysis to determine how the issue of digital divide is framed in the policies. Moreover, experts from the grassroot level of digital divide mitigation were interviewed to determine whether their perception of the issue matches the policymaker’s interpretation. Additionally, the experts evaluated the central agencies in terms of the determinants of democratic legitimation and pragmatic legitimacy.

The findings from this study show that framing of digital divide varies from country to another, but not significantly. There were also slight differences between frames in communication and frames in thought within each country, but the mismatch was not regarded drastic enough to have an effect on the legitimacy. It was found that the digital divide mitigation systems are quite similar in the three countries in terms of actor composition on the grassroot level, but more divergence was observed on higher levels of hierarchy. In all three countries the grassroot level activities are arranged in form of a network: in Finland and Denmark, the coordination role has been assigned to the central digital agencies, while in Sweden the responsibility is dispersed and the network operates on democratic principles. The two agencies that have the coordinating role had some divergence in their legitimacies. The Finnish agency was seen to have higher level of pragmatic legitimacy and it was concluded that an elaborate network structure, involving stakeholders in policy process and efficient communication have favorable effect on legitimacy. Moreover, it was found that on the Swedish grassroot level there is a high demand for governmental coordination and the national digital agency is perceived as an adept authority for the role. It can thus be concluded that the central digital agency is suitable organization to coordinate digital divide mitigation efforts.