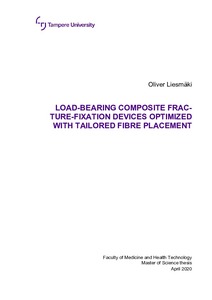 Metallic fracture fixation devices have been the gold standard of internal fracture treatment since their introduction to clinical practice in the late 19th century. While metallic devices are a satisfactory treatment modality for fracture treatment, their utilization has a few intrinsic drawbacks. Biomechanically, their flexural stiffness is typically significantly higher than that of cortical bone. Applying such plates potentially causes mechanical underloading of the bone leading to adverse bone remodeling and complications of the bone healing. The problem is emphasized in veterinary orthopaedics where metals are the main material option for fracture fixation devices.
Fibre reinforced composites (FRCs) are an attractive material option for loadbearing orthopaedic devices. This is due to their good fabricability to match the biomechanical properties of cortical bone by combining lower elastic modulus than that of metals with high flexural strength of bone. Careful fabrication of FRCs also provides good biocompatibility, favorable osseointegration, and adequate wear resistance.
The aim of this thesis was to develop a novel FRC-based fracture fixation plate for antebrachial fractures in toy-breed dogs. Isoelastic properties with cortical bone were aimed to achieve by utilizing tailored fibre placement (TFP) pattern determined and optimized using finite element analysis (FEA) as a main tool. The plates investigated in this study consisted of bisphenol A glycidylmethacrylate-based matrix reinforced by E-glass fibres. A pilot version of TFP plate was mechanically tested with a control plate containing continuous unidirectional fibre reinforcement. The mechanical tests included four-point bending of the plates along with four-point bending and torsion tests conducted on osteotomized chicken tibiae reunited with a plate and metallic screws. Based on simulations of the mechanical tests, the structure of pilot TFP plate was iteratively optimized by FEA. Consequently, the mechanical tests were conducted on the optimized TFP plate designs with the biostable and a semiresorbable consistency comprising polylactide (PLA) matrix and PLA/E-glass hybrid fibres. These tests were followed by a final FEA assessment.
The maximum torque resistance of the optimized TFP plates (0.82 N⋅m) was statistically significantly higher than that of plates with unidirectional fibres (0.25 N⋅m). However, bending strength of 1.03 N⋅m in the plates with unidirectional fibres was superior to that of other plates. Bending strength of the optimized TFP plate (0.343 N⋅m) was still acceptable for its indication. Optimization was successful in reducing the critically loaded volume within the plate. Fibre volume distribution of the plates was improved, providing uniform thickness of the plate.