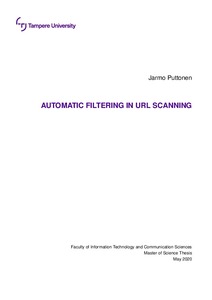 Efficient blackbox web security testing requires that the penetration tester should detect all hidden and visible web content on the targeted web server. Detecting hidden content is usually achieved by enumerating commonly appearing web page paths with a wordlist and inspecting how the server responds to each request.

The RFC 7231 describes that a 404 Not Found status code can be used in HTTP responses to inform the client that the requested path was not found on the web server. If all web applications strictly adhered to the RFC 7231, there would not have been a need for this thesis. However, there are endless ways how a website can react to a request towards a nonexistent path. The server reaction can, for example, depend on the web server software, web application software, web application frameworks, system configurations, customized error page configurations, firewalls, load balancers, and so on. The HTTP response content can be almost anything such as an empty page, redirection or a generic web page that changes a bit on each request. As servers cannot be trusted to always return 404 status codes for nonexistent paths, interpreting the responses can require manual labour. When scanning thousands of hosts, the required amount of manual labour can become too excessive.

Various popular open-source URL scanners provide automatic filtering capabilities which attempt to reduce the required manual work. These capabilities attempt to detect what kind of responses the targeted server provides for nonexistent paths. This information is then used to hide false positives from results automatically. The implementations of these capabilities are often very simple, and more could be achieved by improving the designs.