Design, construction and characterization of a compact vertical and lateral photoluminescence and reflection spectra measurement setup for semiconductor samples 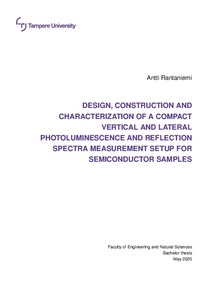 At Tampere University's Optoelectronics Research Centre (ORC), there was a need for a compact, easy to move measurement setup for brief and small scale vertical and lateral photoluminescence characterization at room temperature. Also the ability to measure the reflectivity of the samples with the same setup was desired. The measurement setup was to be used mainly for research on vertical emitting semiconductor lasers: MECSELs, VECSELs and VCSELs. As a part of this thesis, the desired measurement setup was designed and constructed, the process of which is described in detail. The theory required for the basic understanding and analysis of the setup's measurements are introduced along with the basics of fabrication and design of semiconductor devices with an emphasis on optoelectronics.

The energy band structures and advanced growth methods of semiconductors have enabled most of modern digital applications and the ever growing field of optoelectronics. Photolumine-scence (PL) is a common step in the development process of semiconductor devices used for analysis of the grown structures. When measuring PL from semiconductor devices with an integrated mirror structure, such as VECSEL, additional measures need to be considered which leads to the need for lateral PL measurements.