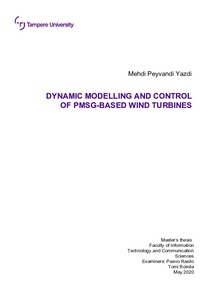 With the high penetration of wind power in the electricity networks, the power system stability issues caused by modern wind turbines have become important. Nowadays, there are several different wind turbine system configurations in the market. In this thesis, the focus is on the direct-drive permanent-magnet synchronous generator wind energy conversion system (WECS) as one of the robust solutions for the large wind turbine applications due to the low demand maintenance and higher reliability because of the gearbox elimination. However, it has been revealed that using direct-driven permanent-magnet synchronous generator (DDPMSG)-based WECSs can cause fluctuations in output power due to soft drive-train system which may lead to instability due to the interaction with the power system inter-area oscillations or the WECS itself. Hence, the control design of a DDPMSG-based WECS has become a significant research topic and different control strategies have been proposed recently. In this thesis, the dynamic behavior of the direct-driven wind turbine coupled to the generator-connected converter is studied. Frequency-domain model of a conventional AC/DC boost converter is upgraded to a PMSG-connected converter where it is found that the q-channel input impedance of the generator has negative electrical damping behavior in the low-frequency range. The interconnected system stability is evaluated based on the impedance ratio method where it is found that the wind turbine coupled to the converter under the open-loop condition is inherently unstable due to the negative resistor like behavior of the converter. The transfer functions of the open-loop model are used to design a cascaded control scheme in which the current control is considered as an inner loop and the DC-link voltage is employed as the outer loop. A non-minimum phase behavior of the current control to the DC-link voltage is analysed in detail and the output voltage controller is tuned for the worst-case scenario. The stability assessment of the closed-loop current control wind turbine generator (WTG)coupled converter is studied, and it is concluded that the interconnected system can be stable as the q-channel input impedance has a high magnitude under a fast-current control loop. The control-to-DC-link voltage transfer function of WTG-coupled converter under the closed-loop current control is utilized to investigate the stability of the interconnected system under the maximum power point tracking (MPPT) mode and the controlled power (CP) mode. It is revealed that under the MPPT mode the same fast DC-link voltage regulation that utilized for the PMSG-connected converter can stably work as there are no RHP-zeros in the control loop. However, when the operation mode switches to the controlled power mode, the WTG-coupled converter becomes unstable because a pair of RHP-zeros appears in the control loop and they impose limitations on the DC-link voltage closed-loop bandwidth. Therefore, in this study, a guideline for tuning PI controller parameters is developed to ensure the stability of the interconnected system under the CP mode. The frequency-domain model is verified through simulations; moreover, the stable operation of the WTG-coupled converter is demonstrated by the time-domain simulations.