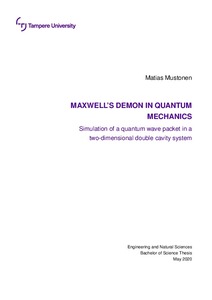 Maxwell’s demon is a thought experiment in which the second rule of thermodynamics is violated. Originally, the thought experiment consisted of two connected cavities with a filter betweenthem. The demon could choose to let particles go through the connection gap. If the demonwere to let faster moving particles to one cavity and slower moving particles to the other cavity itwould introduce a temperature difference in the system. Thus, decreasing the total entropy of thesystem violating the second rule of thermodynamics.In classical mechanics the experiment can be implemented as a two-dimensional two-cavitysystem, where one cavity is integrable and the other is chaotic. The probability for a particleto travel from the chaotic cavity to the integrable is greater than vice versa. This creates animbalance in an observable such as pressure.In this thesis we investigate the quantum mechanical counterpart of the classical double cavitywith one cavity being an integrable rectangle and the other one a chaotic stadium. We initialize thesystem with a quantum mechanical wave packet in one of the cavities and compute the system’stime-evolution. The time-evolution is analyzed with visualizations of the probability density and byinspecting observables related to the system’s ergodic properties such as autocorrelation, inverseparticipation ratio, and information entropy.If initialized in the chaotic cavity, we have found that the wave packet propagates much fasterto the other cavity than if it was initially in the regular cavity. This is a quantum mechanicaldemonstration of the original Maxwell’s thought experiment.