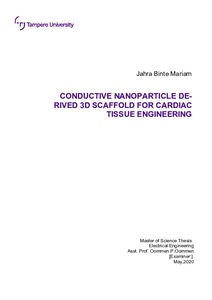 Millions of people are suffering due to cardiovascular diseases worldwide as there are shortage of organ donors and highly invasive and costly transplantation process. Scaffolds made of natural polymers could tissue engineered for cardiac regeneration due to its tailorable biocompatibility, less myotoxicity and predictably stability in mild reaction condition. The aim of the thesis was to develop and characterize two types of hyaluronic acid hydrogels with commercially availed graphene oxide and surface modified graphene oxide which could be used as a scaffold for infracted heart and support cardiac regeneration.
The hyaluronan component was modified with carbodihydrazide (CDH) to form a stable 3D scaffold. The commercially available graphene oxide and surface modified graphene oxide were addressed as uncoated graphene oxide (UGO) and coated graphene oxide (CGO). Characterizations consist of mechanical, viscoelastic, conductivity and antioxidant analysis, along with stability, swelling and degradation kinetics. Cell viability were conducted by expert team of biologist from Oommen’s group. All the characterizations were done for three types of gels and they are gel without nanoparticle (HA-HA gel), gel with commercially available GO (HA-DA-UGO) and gel with surface modified GO (HA-DA-CGO).
From the characterization results, we can say that CDH-modified hyaluronan hydrogels has good stability and superior mechanical property. Inducing surface modified nanoparticle, can give rise to significantly higher conductivity. HA-DA-CGO gel was found most reliable for using in cardiac regeneration as its conductivity was the closest one of that cardiomyocytes, was stiffer and more compact among all the gels with smaller mesh size, has good antioxidant property and smooth degradation profile.
This work is continuing by our team to come up with more proven properties like adhesiveness and characterization of some more types of similar gels, so that we can find among the all types our developed gel which will be the most suitable one for cardiac regeneration as of today. Due to the time limitation of degree completion, this thesis work was limited by characterizing and comparing only three types of gels.