"In Times of a Crisis": Ontological Premises of Asylum Law Debates in Finland and Australia 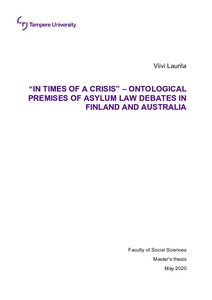 Over the past decades, irregular movement across national borders has increased when various humanitarian crises have forced people to seek refuge outside their country of origin. Due to increased displacement of people, asylum seekers have become a highly controversial topic in politics and public discussion. While there is plenty of research on asylum policies and experiences of asylum seekers, the ways in which politicians justify their arguments for or against particular asylum bills have received less attention.

The aim of this study is to fill the research gap by examining justifications of arguments in asylum law debates of two different countries, Finland and Australia. Similarities and differences in political discourses are accessed through epistemic governance approach. The study focuses on commonly accepted facts and assumptions that politicians rely on when they create and reproduce certain images of social reality. These ontological assumptions are analysed through discourse analysis.

Although there are some differences in the ways in which Finnish and Australian politicians debate on asylum seekers, the study discovered significant similarities between asylum law-related discourses in the two countries. The study identified several shared assumptions of reality that can be found in both Finland and Australia, which supports the claims of epistemic governance that national policies are affected by world cultural influences. While this study contributed to epistemic governance research by examining one object of epistemic work, ontology of environment, in relation to asylum laws, future studies are needed to create a more comprehensive picture of how asylum seekers are portrayed in political sphere.