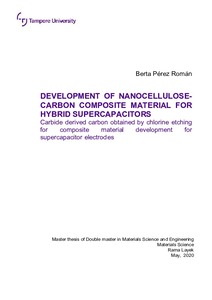 This thesis work deals with the development of carbide-derived carbon by dry etching treatment with chlorine gas of Si-OC material. Silicon oxycarbide was previously obtained by chemical reaction of divinylbenzene (DVB) and a commercial polymeric precursor (SMP-10) based on the polymer-ceramic transformation technology. Three different compositions of DVB/SMP-10 were performed, followed by pyrolysis treatment at three different temperatures; 700,800 and 900ºC. The material was chlorine etching at the same pyrolysis temperature removing non-active phases (silicon and oxygen) to obtain a full carbon material. Carbon content presents sp2 hybridization, so graphite phase is presented on it. From the elemental analysis, carbon content after dry etching is in the range of 90% and by Raman spectroscopy, an amorphous graphite phase was confirmed. Pore and texture analysis were also performed obtaining fundamentally microporosity distribution and specific surfaces areas in the range of 1500-2000 m2/g. About the electrochemical performance, capacitance values around 3-4uF/cm2 were obtained for the carbide-derived carbon (CDC). Finally, flexible composite films were formed by nanocellulose and the carbon material previously mentioned and named as 90/10/900. Two different compositions of 2.5 and 5 wt% of the carbon material were performed, fabricated and designated as 2.5 C/CNF and 5 C/CNF respectively. 2.5 C/CNF film shows good dispersion leading to great mechanical properties with stress at break around 60 %. The mechanical property of 5 C/CNF film was decreased compared to 2.5 C/CNF film due to agglomeration of the few carbon materials in the 5 C/CNF film