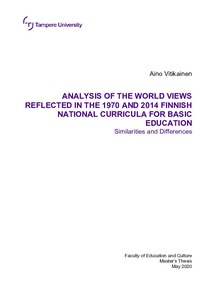 Content analysis was used to examine the 1970 and 2014 curricula to identify and categorise beliefs about epistemology, value theory and conception of the world which, according to the theoretical framework used in the study, capture the essence of world view.

The research results revealed that the world view reflected in the Finnish national curriculum for basic education has changed from one notably influenced by patriotic and religious beliefs into one becoming more broadminded regarding philosophical questions and emphasising both global and ecological perspectives. However, some ideologies have stayed intact: Both curricula emphasise the importance of equality, the basic principles of democracy and value both individualism and collectivism.