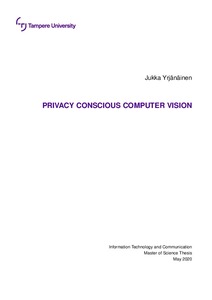 This work describes the design and the implementation of the distributed computer vision solution for person tracking and counting in a public museum. The system consists of an edge device fleet that does send data to a cloud server for further analysis. The key design goal is the protection of the privacy of the persons being monitored. This is achieved by a system that does not send actual images to the server, instead detected persons are represented with a feature vector extracted from the images. Privacy sensitive image data is not stored or transmitted anywhere in the system.

Device design consists of Raspberry Pi single-board computers equipped with a neural network acceleration hardware and a camera module. These devices are used to locate a person from the camera view with the object detection neural network. After object detection a re-identification neural network is applied to the found object to generate a feature vector representation. This vector is sent to the cloud server. Based on the feature vectors it is possible to associate detected people across multiple cameras and moments time. However, it is not possible to reconstruct the original image from the feature vector.

The data analysis method in the server using only feature vector data for tracking and clustering is evaluated. The experiments with publicly available image dataset indicate that with the proposed approach it is possible to approximate person count with reasonable accuracy.