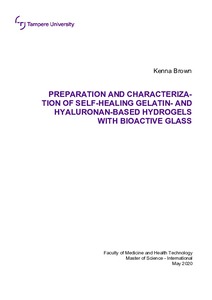 Two challenges of bioabsorbable biomaterial design are the loss of properties over time and the functionality of the biomaterial. Two methods for approaching these challenges are through selfhealing materials and composite materials. Self-healing materials are able to recover their properties to some degree in the event of damage; thus, the material is able to continue functioning with little variation of properties over a comparable time scale and damage. Composite and hybrid materials are highly tunable materials with two or more materials combined to harness the properties of each and, potentially, create new functionalities. This project aims to define three new self-healing composite hydrogels. One that is gelatin-based and two that are hyaluronan (HA) based. The determination of whether the temperature-dependent gelatin hydrogel as described by the reference paper by Liu et al. 2019 was tested by repeating the synthesis of the copolymer, GelMA-UPyMA-MEO2MA (GUM). However, even with alterations to the procedure and the addition of borosilicate bioactive glass (B12.5-Mg5-Sr10) (BG), GUM was determined to be not feasible as described due to inconsistencies in gelation tests, spectrophotometry, and temperature ramp rheological testing. The addition of BG to the HA hydrogels was more promising as the BG decreased the gelation time, the gels remained transparent, and the carbodihydrazide and aldehyde modified HA gel (HAHA) demonstrated improved self-healing at neutral pH. Additionally, the degradation of the HA gels with BG kept the pH consistently neutral compared to the acidic solution of the gels without BG. The alterations to the structure and behavior of the HA gels became more apparent with time, amplitude, and frequency sweeps. Where both HA gels demonstrated decreases in storage moduli, which was further supported by increased relative mesh size and decreases in crosslinking density. However, HA modified with aldehyde groups and polyvinyl alcohol modified with hydrazide groups (HAPVA) was more stable with time and different frequencies. HAHA gels were prone to failure at high frequencies after 24 hours. Rheological results of both HA gels suggest that the BG will stay suspended over time. HAHA gels displayed more brittle behavior during compressive testing at high strains and had lower stiffnesses, which reflects the structural changes and brittle behavior of BG incorporated into the gel. GUM and HAPVA do not seem promising as candidates for composite hydrogels as they are currently. HAHA hybrids have drawbacks, but with further study and optimization, the advantageous properties, such as improved self-healing and transparency, could be useful for biomedical applications.