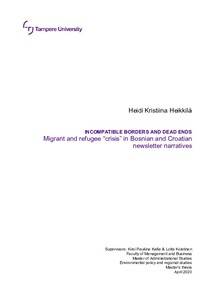 This thesis talks about the migration situation in two countries in the Balkans, Croatia, and Bosnia-Herzegovina (Bosnia). In 2015 Europe experienced an influx of forced migrants, leading to different types of reactions and changes in policies in European countries and in the European Union (EU). In the media, these events were titled as the migration or refugee “crisis” and the media got an important role in defining the “crisis”. Although the number of incoming migrants has decreased, there are still people leaving their homes and turning towards Europe. The journey of some of these people has stopped at the outside border of the EU, as is in the case of the border with Croatia and Bosnia. This study looks into two medias, HINA from Croatian and Bosnia Daily from Bosnia and analyzes their narratives on the migration situation in the area. The research material was collected during summer 2019, as summer is the time for increased migratory movements.

In the study, I examine the migration situation trough the concept of forced migration and reflect the different terms used in the context of migration, such as refugee, asylum seeker, and illegal migrant. I also discuss migrant management, such as the refugee and migrant camps, and how it affects on the agency of the migrants and its representations in media. The previous studies have shown that instead of giving voice to the migrants, the media often uses statements of the state officials and authorities when writing about migration. These sources tend to exploit securitization arguments when justifying the policies towards migrants, and therefore I also write about the discussion regarding the securitization of migration in the media. I also talk about the reactions of the EU and its Member States by addressing the EU’s Turkey Agreement as well as the “Hot Spot Approach”, as the EU is considered as an important actor within the “crisis”.

I use narrative analysis to study the dominant narratives regarding the migration situation in the research material. As a result, I have created four dominant narratives: 1) Croatian border protection 2) Porous and impassable borders 3) Ethnically divided armed forces against migration 4) Managing migration. The first narrative portrays Croatia taking its position by the EU’s external border seriously, meaning it protects the border from irregular entries with any means necessary. The second narrative looks at the situation from Bosnia’s perspective and presents Bosnia as suffering from its neighbor countries policies. The third narrative addresses the complex administrational situation in Bosnia which effects on migration management in the country and is used as an advantage by one of the ethnic groups in the country. Finally, the fourth narrative talks about the challenges of migration management, focusing on a camp established in Bosnia.

The analysis shows that in Croatian and Bosnian media the migration situation is narrated similar to what the previous studies have shown. The forced migrants are categorized as deserving and undeserving political and economic migrants. The state authorities use securitization arguments to legitimate sealing the state, or even areal, borders and putting the migrants in camps in order to prevent them from interacting with the local population. However, the history of the area as a part of the former Yugoslavian state and Croatia now being a member state of the EU makes the situation unique, as the ethnical division of especially Bosnia makes the country and its borders difficult to handle. Croatia, and the whole EU, is blamed for closing its borders and being incapable of decision making when it comes to the migrant situation. However, the most desired solution in both countries seems to be closing the borders or bordering the migrants away from the host society.