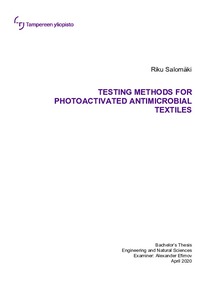 Photodynamic antimicrobial chemotherapy is considered as a possible way to circumvent antimi-crobial resistance and control the spreading of multidrug-resistant microbes. It is based on mole-cules called photosensitizers, which can absorb light and transfer the excited energy state to ambient molecular oxygen. The antimicrobial activity is mediated by in situ generated reactive oxygen species, of which the most important is singlet oxygen. Reactive oxygen species destroy microbes by a multipath oxidation of, for example, lipids, proteins, and DNA eventually leading to cell death. For example, textiles and other surfaces can be functionalized with photosensitizers.
This thesis is a literature review. In the beginning, a quick overview on the development of light therapies is presented, followed by brief chemistry of oxygen, light-sensitized generation of reac-tive oxygen species, and examples of different photosensitizers. Then antimicrobial textiles are discussed along with examples of active substances used and methods of production. The goal of this thesis is to find out the methods used to test the efficacy of antimicrobial textiles and com-pare them. The applicability of these methods for photoantimicrobial textiles is also considered.
Research on antimicrobial materials and surfaces aims for the development of methods to control the spreading of disease-causing microbes. Most diseases encountered by humans are caused by microbial communities, called biofilms, growing on surfaces. Biofilms are exceptionally re-sistant and difficult to destroy due to their protective structure. Commercial antimicrobial textiles utilise, for example, silver-based compounds as their active ingredient. Light-activated antimicro-bial textiles are a more recent invention, which is based on functionalizing the textile with photo-sensitizers.
Many standardized methods are recognized for the testing of efficacy of antimicrobial textiles. Test results between different studies are, however, poorly comparable and difficult to reproduce. Results from tests are affected by the growth media, incubation conditions, contact time between the microbe and the sample, microbial concentration and strain, as well as the method of analys-ing the outcome. Also, minimal diffusion or solubility of the antimicrobial agent to the surrounding media may result in false-negative results in some methods. When considering photoantimicrobial textiles, the even distribution of light must also be considered. Three methods are described for analysis of quantitative tests.
Six qualitative and eight quantitative methods for antibacterial testing are presented. Also, two antifungal and one antiviral test methods are discussed. Test methods for antibacterial efficacy are compared with each other. Three methods for analysing the results from quantitative testing are described, of which the most often encountered method is the counting of colony forming units on agar. This method is also the most laborious and time consuming. The other two rely on measuring absorption of light. The MTT assay measures the concentration of a colourful sub-stance produced by reduction via active microbes. In the OD600 assay the concentration of micro-bial cells is measured by direct measurement of optical absorption. Each of these methods meas-ure a somewhat different quality of the microbes and thus must be compared with caution.
It is important to find the best methods for testing photoantimicrobial textiles for the development to move forward efficiently. Careful designing of the tests could possibly produce reproducible and comparable results.