Electrophysiology of cardiac tissue in health and disease 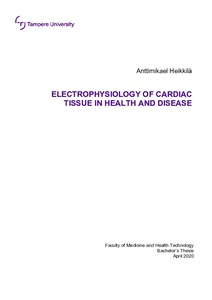 Optimal function of the heart is dependent on correct timing of electrical activation and contraction in different sections of the myocardium. This is achieved via specific electrical properties between cardiac cells including different ion currents and rapid propagation of action potentials through gap junctions. In a diseased heart, these processes can be disturbed, thus resulting in different arrhythmias and alterations in heart contractility.

In terms of action potential conduction, specific interactions at intercalated discs (ICDs) are discussed, especially regarding gap junctions and voltage-gated sodium channel complexes at perinexi. After considering the interaction and function of these complexes in normal physiology, this study discusses the pathophysiology related to these electrical components.

Cardiac sodium channels underlie the rapid upstroke in cardiac myocytes. In addition, according to recent studies these sodium channels have a significant role in electrical coupling between adjacent cardiomyocytes. Thus, it is not surprising that there is a broad range of different arrhythmias that arise from mutations in genes related to regulation of sodium channel localization, expression or function.

Different diseases and mutations can affect expression of scaffolding proteins, such as ankyrin-G, at the intercalated discs, and therefore, affect the dispersion of the main electrical couplers, such as connexins and sodium channel complexes. As the study focuses on the function of sodium channels, particular subtypes of Brugada syndrome and long-QT syndrome are compared. In the two disease types mentioned the mutations in NaV1.5 channel coding SCN5A gene lead to opposing phenotypes considering the NaV1.5 function.

In conclusion, these findings indicate that mechanical adhesion and excitability complexes at the ICD are dependent on each other functionally, and as well that the sodium channels have a major role in ephaptic coupling. These interactions are studied mainly with murine models, human induced pluripotent stem cell-derived cardiomyocytes and computational models. Understanding these interactions is essential when discovering new anti-arrhythmic therapeutics.