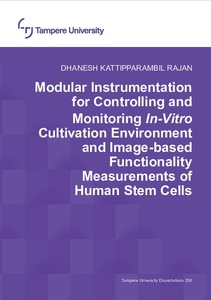 Artificial animal cell culture was successfully developed by Ross Harrison in 1907. But it was not until the 1940’s and 1950’s that several developments occurred, which expedited the cell culturing in-vitro (C-Vitro) to be a consistent and reproducible technique to study isolated living-cells in a controlled environment. Currently, CVitro is one of the major tools in cellular and molecular biology both in the academia and industry. They are extensively utilised to study the cellular physiology/biochemistry, to screen drugs/therapeutic compounds, to understand the effects of drugs/toxic compounds and also to identify the pathways of carcinogenesis/mutagenesis. It is also used in large scale manufacturing of vaccines and therapeutic proteins. In any experimental setup, it is important that the C-Vitro model should represent the physiological phenomena of interest with reasonable accuracy so that all experimental results are statistically consistent and reproducible. In this direction, sensors and measurement systems play important roles in in-situ detection and/or control/manipulation of cells/tissues/environment. This thesis aimed to develop new technology for tailored cell culturing and integrated measurements. Firstly, design and assembly of a portable Invert-upright microscope interchangeable modular cell culturing platform (iuCMP) was envisioned. In contrast to conventional methods, micro-scaled systems mimic the cells' natural microenvironment more precisely, facilitating accurate and tractable models. The iuCMP integrates modular measurement schemes with a mini culture chamber using biocompatible cell-friendly materials, automated environment-control (temperature and gas concentrations), oxygen sensing and simultaneous functional measurements (electrophysiological and image-based). Time lapse microscopy is very useful in cell biology, but integration of advanced >i>in-vitro/device based biological systems (e.g. lab/organ/body-on-chips, or mini-bioreactors/microfluidic systems) into conventional microscopes can be challenging in several circumstances due to multiple reasons. But in iuCMP the main advantage is, the microscope can be switched either as an inverted or as an upright system and therefore can accommodate virtually any in-vitro device. It can capture images from regions that are otherwise inaccessible by conventional microscopes, for example, cells cultured on physical or biochemical sensor systems. The modular design also allows accommodating more sensor or measurement systems quite freely. We have demonstrated the system for video-based beating analysis of cardiomyocytes, cell orientation analysis on nanocellulose, and simultaneous long-term in-situ microscopy with oxygen and temperature sensing in hypoxia.

In an example application, the system was utilised for long-term temperature stressing and simultaneous mechanobiological analysis of human induced pluripotent stem cell-derived cardiomyocytes (hiPSC-CMs). For this the iuCMP together with a temperature sensor plate (TSP) and a novel non-invasive beating analysis software (CMaN—cardiomyocyte function analysis tool, scripted as a subpart of this thesis), was applied for automated temperature response studies in hiPSC-CM cultures. In-situ temperature sensing is usually challenging with bulky external sensors, but TSPs solved this issue. In the temperature response study, we showed that the relationship between hiPSC-CM beating frequency and temperature is non-linear and measured the Q10 temperature coefficients. Moreover, we observed the hiPSC-CM contractile networking, including propagation of the action potential signal between dissociated clusters and their non-invasive measurements. It was the first case where these events were reported in hiPSC-CM clusters and their noninvasive measurements by image processing.

The software CMaN comes with a user-friendly interface and, is equipped with features for batch processing, movement centre detection and cluster finding. It can extract six different signals of the contractile motion of cardiomyocytes (clusters or single cells) per processing. This ensures a minimum of one useful beating signal even in the cases of complex beating videos. On the processing end, compared to similar tools, CMaN is faster, more sensitive, and computationally less expensive and allows ROI based processing. In the case of healthy cells, the waveform of the signal from the CMaN resembles an ECG signal with positive and negative segments, allowing the computation of contraction and relaxation features separately.

In addition to iuCMP, a Modular optical pH measurement system (MO-pH) for 24/7 non-contact cell culture measurements was also developed. The MO-pH incorporates modular sterilisable optical parts and is used in phenol-red medium cell cultures. The modular assembly of MO-pH cassettes is unique and reusable. Measurements are carried out in a closed flow system without wasting any culture medium and requires no special manual attention or recalibrations during culture. Furthermore, a new absorption correction model was put forward that minimised errors caused e.g. by biolayers in spectrometric pH measurement, which improved the pH measurement accuracy. MO-pH has been applied in long-term human adipose stem cells (hASC) expansion cultures in CO2 dependent and independent media. Additionally, the MO-pH was also utilised to comprehend the behaviour of pH, temperature and humidity in water jacked incubators as well as to record the pH response as a function of temperature in the presence and absence of CO2 in the context of stem cell cultures. The resulting plots clearly showed the interplay between measured parameters indicating a few stress sources present all through the culture. Additionally, it provided an overall picture of behaviour of critical control parameters in an incubator and pointed out the need for bioprocess systems with automatic process monitoring and smart control for maximum yield, optimal growth and maintenance of the cells. Besides, we also integrated MO-pH into flasks with reclosable lids (RL-F) and tested its applicability in stem cell cultures. A standalone system around an RL-F flask was built by combining the cell culture, medium perfusion and optical measurements. The developed RL-F system has been successfully tested in ASC-differentiation cultures.

Finally, a few trial experiments for image-based pH estimation aimed for iuCMP have also been carried out. This includes tests with LCD illumination, optical projection tomography, and webcam systems. In reality, the pH is not distributed uniformly in tissues, and has shown a gradient of up to 1.0 pH unit within 1 cm distance. Therefore, producing reliable pH maps also in in-vitro can be important in understanding various common pathologies and location of lesions. A reliable and adequately developed long-term pH mapping method will be an important addition into the iuCMP.