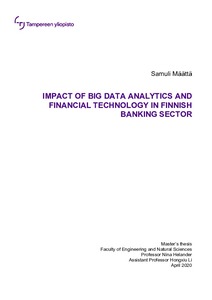 Tietojohtamisen DI-tutkinto-ohjelma - Degree Programme in Information and Knowledge Management, MSc (Tech)
Tekniikan ja luonnontieteiden tiedekunta - Faculty of Engineering and Natural Sciences
This publication is copyrighted. You may download, display and print it for Your own personal use. Commercial use is prohibited.

Banking sector has gone through many changes after the recent financial crisis, where the most notable ones are technological leaps in terms of big data analytics and added regulatory pressure towards the banks. Especially in the EU area, the changes to regulation have shaped the banking sector market, in which PSD 2 directive is one key factor. Tightened regulation towards the banks as well as EU’s will for more open competition has brought new players into financial industry markets, and Financial Technology (FinTech) companies have especially emerged to these markets. Banks are in the midst of a turning point, and to survive they have needed to digitalize their services and processes in addition to the factors stated above but also because of increased demands from the customers. This research examines the factors that affect Finnish banks from the perspectives of FinTech and big data analytics.
The research has been executed in two parts. In the first part, a literature review is conducted from the subject matters of the research. The purpose of the literature review is to give an understanding to the reader about different themes relating to the research and what have been the most influential factors in the history of banking sector from the FinTech and big data analytics point-of-view. The second part of the research is an empirical study, in which Finnish experts in banking sector are interviewed. Empirical study is conducted as a qualitative research, where the purpose is to validate the phenomena impacting banking sector gathered from the literature review and to make general conclusions on how Finnish banking sector is aligned with compared to the international comparison coming from the literature review.
The results of the research indicate that changes impacting Finnish banks from the perspectives of FinTech and big data analytics are two-folded. From the big data analytics viewpoint Finnish banks seem to mostly be aligned with the observations made in the literature review. The most influential factors affecting Finnish banks are the rise of big data and its challenges, and also the technological application utilization in banks’ own business core functions. Big data analytics applications were identified especially in the fraud and money-laundering prevention. In addition, big data analytics applications have been seen as a way to solve the increased customer centricity among Finnish banks. It was identified that in the Finnish banking landscape the banks are relatively capable in terms of data analytics when compared to international landscape, and especially the capabilities in terms of digitalization are above average in the international comparison. Finnish consumers were also seen as more demanding, as they have been used to digital services such as mobile banking for years now.
From FinTech point-of-view, the results were somewhat contradictory when comparing the literature review to the empirical study. The results of the literature review showed that the focus of academic literature is pointed towards the competition between the FinTech companies and banks, while in the empirical study it was evident that Finnish banks see the FinTech more as partnerships and a way to collaborate. Also, Finnish FinTech companies were seen relatively positively by the banks.