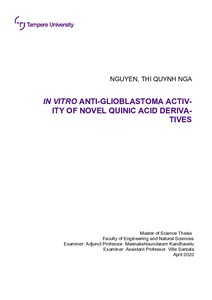 Glioblastoma multiforme, the common malignant tumor with a worst prognosis, is considered as the most challenging in brain tumor treatment. Variety of therapies are currently used for glio- blastoma treatment including the combination of surgery with radiotherapy and chemotherapy. Chemotherapy is effective treatment for patients, however risky due to serious side effects is observed. In specific, temozolomide (TMZ), the most prevalent effective anti-glioblastoma agent in chemotherapy, is currently utilized during or after radiation therapy, unveils drawbacks such as the development of TMZ resistance and bone marrow suppression. As a consequence, this treat- ment results in reduction in mortality rate. It is expected that the appearance of novel chemother- apeutic agents, newly synthesized anticancerous compound, could be both effective and safe to address these obstacles. As such, quinic acid and their derivatives recently has grasped the no- table attention in treatment of cancers by a broad-spectrum of preeminent properties such as antioxidation, anti-inflammation, anticancer, which were demonstrated by afore studies. In addi- tion, nicotinamide, which is converted from quinic acid is proven to induce apoptosis via inhibition of Nuclear Factor- Kappa B, indicates the efficacy of quinic acid in cancer treatment. Therefore, the quinic acid derivatives with the modifications to enhance their function towards glioblastoma treatment, were chemically synthesized and examined as potential chemotherapeutic agents. In this study, the total of sixteen novel quinic acid derivatives were screened for preliminary cytotox- icity, in which AK-4 was defined as the top lead compound with cell growth inhibition of 90.12 ± 5.10 % utilizing cytotoxic assay. Further studies were conducted in an attempt to evaluate the anticancer properties of AK-4 towards proliferation, migration, and reactive oxygen species (ROS) generation of two glioblastoma cell lines LN229 and SNB19 as well as influence on the growth of non-cancerous cells, MEF. AK-4 showed the low inhibitory potency (IC50), which were determined as 10.66 ± 4.71 μM and 28.22 ± 9.87 μM in LN229 and SNB19, respectively. In term of time- dependent effect, there was a slight rise in inhibitory ability of AK-4 against glioblastoma cells growth; nevertheless, it is observed that AK-4 was less cytotoxic with respect to sodium ortho- vanadate, positive control, over 72 h drug exposure. Additionally, at high concentration of 100 μM, AK-4 still be considered to be less harmful to non-cancerous cells, MEF with IC50 of 54.35 ± 10.18 % cell growth inhibition, which was significantly lower than the IC50 of two glioblastoma cell lines. Moreover, scratch assay revealed that AK-4 exhibited comparable inhibitory effect on mi- gration of the cells, in both cell lines with respect to sodium orthovanadate over 8 hours. The evaluation of ROS level observed in both cell lines suggests the association of AK-4 with induction of cancer cell death. The findings in this study provided preliminary evidence suggesting that AK- 4, a quinic acid derivative, could be promising chemotherapeutic agents, especially in glioblas- toma treatment. This study also has laid the groundwork for further investigations aimed at devel- oping more effective anticancer drugs.