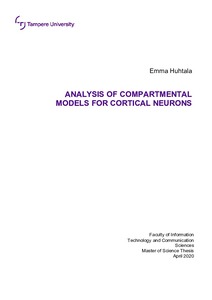 Pyramidal cells are the primary excitatory neurons in the cerebral cortex of the mammalian brain. They have complex morphological structures which have been shown to influence the computational capabilities and higher cognitive functions of the brain. In addition to complex structure, pyramidal cells also have diverse biophysical properties. The biophysical properties are conventionally described using conductance-based models, where the neuronal cell membrane can be represented as an equivalent electrical circuit. Here, the lipid bilayer is described as a capacitor and the ion channels as conductances. To account for both the complex morphology and the intricate biophysical properties of pyramidal cells, a state-of-the-art compartmental modeling framework is adopted. In this framework, the morphology is compartmentalized and each segment is represented using a conductance-based approach.
Many different compartmental models of cortical pyramidal cells exist but thus far a systematic review of these models has not been conducted. The aim of this thesis is to review publications with compartmental models of cortical pyramidal cells and to evaluate the models quantitatively. The emphasis of this work lies on peer-reviewed models implemented in the NEURON simulation environment as well as models available in public repositories. NEURON is a simulation tool widely used in the field of computational neuroscience. The literature review comprehensively lists the publications with compartmental models of cortical pyramidal cells and analyzes the implemented models and their properties. The review provides guidelines on choosing a suitable compartmental model for a cortical pyramidal cell.
Another aim of the thesis is a simulation-based analysis of a selected model using two new and promising tools. At the same time, the properties of these tools are evaluated. First, the role of the morphological complexity of the model is assessed by using the Neuron_Reduce Python toolbox. Second, the uncertainty of model parameters is examined with the Uncertainpy Python toolbox. The conductance-based models often depend on uncertain parameters which cause inherent variability in model dynamics. The uncertainty arises from various sources, such as different measurement methods, measurement error or biological variability. The model used in the simulations was a layer 2/3 pyramidal cell model from the rat somatosensory cortex.
With moderate reduction of the model (preserving 10-25% of the original model compartments), the Neuron_Reduce toolbox simplifies the cell while replicating the behavior of the original model. However, a dramatic reduction (3% of the original model compartments) led to quantitative differences in the model dynamics. The results obtained with Uncertainpy revealed that some model parameters have a greater effect on the sensitivity of the model indicating that these parameters should be carefully considered. The simulations carried out in this work prove that both of the Python packages used here are useful tools in analyzing models in neuroscience.