The Functional Consequences of ZNF414 Overexpression in Pancreatic Cancer Cells 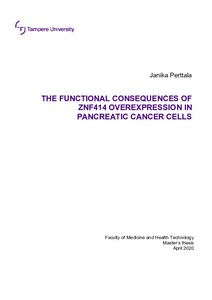 Background and aims: All cancers are known to arise from genetic mutations in specific driver genes, including oncogenes, tumor suppressor genes and DNA repair genes. DNA alterations in these genes lead to malfunction of transcriptional regulation that normally controls various biological processes including cell differentiation and development, maintenance of intracellular balance, and cell cycle progression. Transcription is tightly regulated by a diverse array of DNA-binding proteins including transcription factors. Zinc-finger proteins form the largest group of eukaryotic transcription factors and their altered expression levels are known to be associated with development and progression of cancer. Zinc-finger protein 414 (ZNF414) is one of the newly discovered regulators of pancreatic cancer cell growth. Knockdown of ZNF414 expression has been shown to result in a distinct G1 arrest and thereby decreases the growth of cancer cells. Still, there are many unresolved issues related to cellular function of ZNF414 in pancreatic cancer. Therefore, the ultimate aim of this study was to examine the functional consequences of ZNF414 overexpression in pancreatic cancer cells.

Methods: In this study, lentivirus-based Lenti-X Tet-One® Puro Inducible Expression system was used to generate stable SU.86.86 and Hs700T pancreatic cancer cell lines overexpressing ZNF414. The Lenti-X Tet-One® Puro includes the pLVX-TetOne-Puro vector which was used to transduce the gene of interest, ZNF414, into the target cells. The vector also contains necessary components for tightly controlled expression of ZNF414 when the cells are cultured in the presence of doxycycline. Prior to functional studies, the functionality of the pLVX-TetOne-Puro-ZNF414 was examined in transduced SU.86.86 and Hs700T cells by comparing the ZNF414 expression between induced and uninduced cells. To characterize the functional consequences of ZNF414 overexpression in pancreatic cancer cells, the cell cycle and proliferation of ZNF414-overexpressing cells were examined by flow cytometry and crystal violet staining, respectively.

Results: The ZNF414 gene was successfully cloned from the pMK-RQ plasmid into the pLVX-TetOne-Puro vector. After transduction, the SU.86.86 cells expressed high levels of ZNF414 when the expression was induced with doxycycline. Similar effect in transduced Hs700T cells was not detected and transduction was thus considered unsuccessful in the Hs700T cells. Functional studies were performed by using the SU.86.86 cells as a model for studying the cellular phenotype of ZNF414 overexpression. The results showed no difference in the proliferation and cell cycle between ZNF414-overexpressing SU.86.86 cells and control cells.

Conclusions: The proliferation and cell cycle of pancreatic cancer cells are not affected by the ZNF414 overexpression. The generalizability of the results is limited by narrow sampling since the functional studies were only performed with SU.86.86 cells. In the future, the study should be repeated with additional cancer cell lines in order to confirm our findings and to gain a thorough insight into the role of ZNF414 overexpression in cancer.