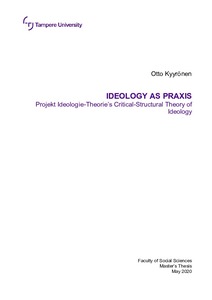 The general objective of this work is to study the phenomenon of ideology within Projekt Ideologie-Theorie’s (PIT) “critical-structural” framework. PIT’s ideology-theoretical formulations have been, as it were, “forgotten” in many ideology-theoretical discussions despite the fact that they are both insightful and significant. PIT conceives of the “ideological” as a social dimension that necessitates alienated socialisation from above. PIT adopts Louis Althusser’s distinction between the ideological “in general” and ideologies “in particular”. However, they do so by re-historicising Althusser’s formulations in accordance with Antonio Gramsci’s “philosophy of praxis”. PIT locates ideology not at the level of consciousness but at the level of social practices. Therefore, it is necessary to explore the role played by practices and forms of praxis in order to understand how the ideological functions. My main argument is that PIT’s “practical” approach makes it possible to both deconstruct and reconstruct ideologies. It is this ability which renders PIT’s critical-structural theory of ideology essential for any critical social agent and theorist.PIT was put together by Wolfgang Fritz Haug with some of his most promising students in West Berlin in 1977. One of these students was Jan Rehmann whose writings serve as an important reference point in this work. Two of PIT’s initial goals were to overcome the problems that many other theories of ideology had encountered and to figure out why Fascism had so successfully conquered the German social formation during the first half of the twentieth century.I will analyse PIT’s theory of ideology in three parts. First, I argue that the notion of praxis is found at the core of Karl Marx and Friedrich Engels’ oeuvre. Marx and Engels were among the first writers who made use of the concept of ideology after Antoine Destutt de Tracy coined the term in 1796. PIT studies Marx and Engels’ writings in order to construe philologically the most valid reading of their conception of ideology. It is important to understand that Marx saw religion as an ideological form of praxis that has a double function: it is the “opium of the people”; but it is also the “sigh of the oppressed creature”. By underlining this double function of ideologies, PIT strives to understand not only what is “false” about ideologies but what about them is “true”. In this regard, I also read Gramsci’s and Haug’s writings about a philosophy of praxis, whose concepts such as “common sense” and “social dispositive” elaborate the relation between humans’ practical and intellectual activities.Second, I focus specifically on forms of praxis, through which it is possible to understand that determination results from indetermination; the indeterminate practical activities of humans are channelled to determinate forms of praxis. I differentiate between forms of production and ideological forms, while highlighting that a vulgar dualism of a materialistic “base” and an ideational “superstructure” is neither present in Marx and Engels’ writings nor useful for critical social theory. I propose a definition of the capitalist mode of production that consists of fourteen attributes, after which I discuss the essential notion of “objective thought-forms”. Then, I analyse concepts such as “ideological powers”, “interpellation”, “historical bloc”, and “hegemony” in order to explain how the ideological operates by the mediation of various ideological forms of praxis. From this it follows that counter-hegemony can only be brought about by participating in ideological struggles which are carried out in the ideological forms.Third, I explore PIT’s distinction between “alienated socialisation from above” and “cultural self-socialisation from below”, which makes it possible to understand how the vertical and horizontal axes become intertwined within hierarchical structures of domination typical to class society. It is by the amalgamation of the vertical and horizontal axes that the ideological dimension operates. I also define PIT’s concepts of “proto-ideological” and “ideological values”, which are important for their approach. Then, based on PIT’s theory, I construct seven methodological steps for studying ideologies, and I demonstrate their usefulness by applying them to the analysis of neoliberalism. Neoliberalism can be understood as an organic ideology that promises its subjects emancipation while subjugating them under authoritarian state apparatuses and the silent compulsion of economic relations. I argue that it is possible to deconstruct neoliberalism by emphasising the contradiction between personal freedoms and authoritarian practices, and that a counter-hegemonic project ought to bring about individual liberation by way of social emancipation.