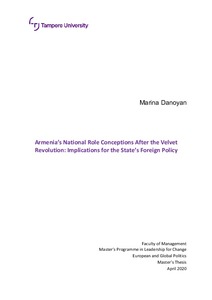 Armenia’s Velvet Revolution hasn’t brought considerable changes to Armenia’s foreign policy priorities. Yet, with the changes in domestic policy, the perceptions, attitudes, values and beliefs of those who are responsible for formulating foreign policy objectives have been changing, bringing new dynamics to Armenia’s relations with its external partners. Building on the social constructivism approach and the theory on National role conceptions, the Master’s thesis aims to find out how Armenia’s role conceptions and the evolution of the state’s identity in the post-Velvet Revolution context affect Armenia’s foreign policy and whether and how those changes influence the relations with its strategic foreign partners, namely Russia and the EU.

I applied the discourse analysis approach to find out how the national role conceptions have been (re-)produced in the post-Velvet Revolution context. The analysis was based on 13 semi-structured face-to-face interviews that I conducted with representatives of the executive and legislative branches of Armenia’s current government, as well as the expert community. Through the discourse analysis, the study revealed six role conceptions dominating in the discourse of the current political leadership. The analysis showed conflicting aspects between Armenia’s role as a faithful ally-balancer and the one of a full sovereign subject. Putting those conflicting aspects in the context of Armenia’s relations with Russia and the EU, the findings indicated tensions between Armenia’s current political leadership’s view on the development of relations with each of those actors (the ego part of the role) and Armenia’s political leadership’s perceptions of those actors’ expectations with regard to Armenia’s foreign policy behaviour (the alter part of the ego).