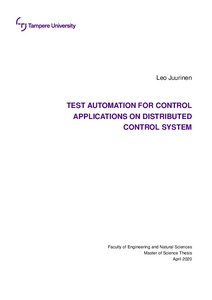 Feedback for developer of changes for automation system takes a long time. Typically this requires a new build and a installation of the automation system or a part of it. The change is then verified by a test engineer with a manual test. The test findings are forwarded back to the developer who possibly has to make new modifications based on the test results. The time gap between the change and a feedback is too long, the developer may have moved on to a new task and an old change follow-up may causes the developer to suffer from context switch.
To speed up the feedback to the developers, test automation solutions commonly used in software development were added to the existing continuous integration system of Valmet Automation. Methods to test control applications on a real distributed control system were explored and implemented. Automated system upgrade for existing manual test environment was created and the new tests were automatically executed after the upgrade.
Now more information on the developers’ changes is gathered faster with larger test coverage. The hardware testing environment has a newest system installed each morning with new test results available. Test automation handles monotonous a testing process leaving test engineers with more time and giving developers faster feedback. Test automation is a plausible way to test control applications of a distributed control system, and can be expanded.