A robotic engine assembly pick-place system based on machine learning 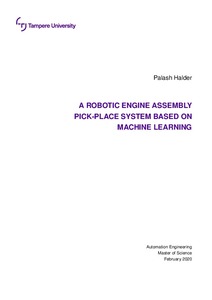 Industrial revolution brought humans and machines together in building a better future. Where in one hand there is need to replace the repetitive jobs with machines to increase efficiency and volume of production, on the other hand intelligent and autonomous machines have still a long way to go to achieve dexterity of a human. The current scenario requires a system which can utilise best of both the human and the machine. This thesis studies a industrial use case scenario where human-machine combine their skills to build an autonomous pick place system.
This study takes a small step towards the human-robot consortium primarily focusing on developing a vision based system for object detection followed by a manipulator pick place operation. This thesis can be divided into two parts : 1. Scene analysis, where a Convolutional Neural Network (CNN) is used for object detection followed by generation of grasping points using object edge image and an algorithm developed during this thesis. 2. Implementation, it focuses on motion generation while taking care of external disturbances to perform successful pick-place operation. In addition human involvement is required which includes teaching trajectory points for the robot to follow. This trajectory is used to generate image data-set for a new object type and thereafter generating new object detection model. The author primarily focuses on building a system framework where the complexities related to robot programming such as generating trajectory points and informing grasping position is not required. The system automatically detects object and performs a pick place operation, resulting in relieving user from robot programming. The system is composed of a depth camera and a manipulator. Camera is the only sensor available for scene analysis and the action is performed using a Franka manipulator. The two components work in request-response mode over ROS.
This thesis introduces a newer approaches such as, dividing an workspace image into its constituent object images and performing object detection, creating training data, generating grasp points based on object shape along length of an object. The thesis also presents a case study where three different objects are chosen as test objects. The experiments are a demonstration of the methods applied and efficiency attained. The case study also provides a glimpse of the future research and development areas.