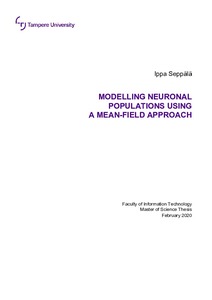 The human brain consists of roughly a hundred billion interconnected neurons that work together to give rise to higher-level brain functions like memory consolidation and emotions. Single-cell models for neurons have existed since the start of the 20th century, often taking the form of diﬀerential equation systems. Connecting these cell models to form a network leads to large coupled systems that can be very challenging - if not impossible - to solve analytically.
The mean-ﬁeld approach borrowed from theoretical physics allows us to represent large networks of neurons by studying the mean behaviour of the population. This means that we can assume the behaviour of each and every cell to tend to a mean average in a network that is large enough, due to the asynchronous behaviour such biological networks tend to exhibit. The mean- ﬁeld method simpliﬁes a large network of spiking neurons down to a single distribution function that describes the time evolution of the probability density of the population when it moves across its state space. This leads to the Fokker-Planck equation representation of the neuronal system.
In this Master of Science Thesis we study the mathematics behind these mean-ﬁeld methods and how they can be applied to diﬀerent neuronal models. As the Fokker-Planck equation is a seminal part of the mean-ﬁeld approach, we explain how it is derived using Markovian chains and the concept of Brownian motion. We then concentrate on three diﬀerent models in closer detail and show the reader how to derive and solve the resulting diﬀerential equation systems. Lastly we discuss how these models diﬀer from each other both mathematically as well as biologically, and compare their respective properties.