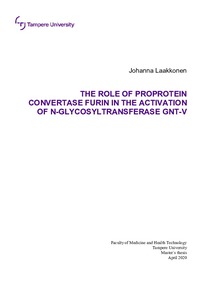 Background and aims: PCSKs are an important enzyme family in protein maturation and needed for several biological processes. Another, equally important enzyme family, N-glycosyltransferase Gnt, also affects many aspects of biological functions. In addition to being involved in maintenance of health and normal functions, they also affect development of diseases. PCSK enzyme FURIN and N-glycosyltransferase Gnt-V are involved in T cell biology and are vital for normal T cell functions and immune system in general. Their expression is increased upon T cell activation, and their deficiency is associated with increased T cell reactivity and autoimmunity. In addition, both are active and localized mainly in the Golgi apparatus. Despite their shared functionality and intracellular localization, their interrelatedness has not been studied. In this study we investigated the role of FURIN in Gnt-V proteolytic processing and activity.
Methods: The effect of FURIN on Gnt-V activity was studied by comparing L-PHA staining of mouse wild type T cells and T cells with a conditional deletion of FURIN. The amount of Gnt-V product-bound stain on the surface of T cells was detected using FACS and differences and significance was analysed with R software. FURIN´s cleavage activity on Gnt-V was studied with western blot using hamster CHO-K1 cells and FURIN-deficient RPE.40 cells transfected with human Mgat5 vector with and without human FURIN vector. Also FURIN stable transfected Jurkat cell lines were used. In addition, FURIN´s effect on the mRNA levels of the Mgat family genes was studied using RNA sequencing.
Results: FURIN significantly affects Gnt-V activity in naive and memory T cells of mice. The amount of Gnt-V-modified glycans was greater in naïve than memory cells, and higher in wild type cells than in T cells with conditional FURIN knockout. FURIN does not directly process Gnt-V at its predicted cleavage site, but increases unspecific fractioning of the protein in transfected hamster CHO-K1 and RPE.40 cells. In Jurkat T cells, no clear quantitative enzymatic or non-enzymatic effect of FURIN on Gnt-V fractioning was detected. FURIN also does not affect Mgat family mRNA expression levels in CD8 positive naïve mouse T cells.
Conclusions: FURIN is not required for Gnt-V processing, but increases its degradation, and indirectly affects its activity. Change in the Gnt-V activity is a possible mechanism behind the sensitization of memory T cells to antigen-induced activation.