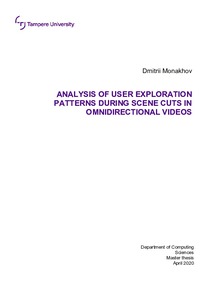 Video content is usually represented as a sequence of scenes joined together. Two adjacent scenes can share the same semantic content, similar to filming the scene from different angles, or they can describe semantically different content. The methods that switch between two adjacent scenes are called scene transitions. In the case when two scenes are just concatenated with no additional effects, the transition is called a scene cut. The scene transition is a vital instrument for guiding user’s attention in classical cinema, but the impact of scene transitions becomes more relevant in a 360° video environment. During the scene transition, the user loses his/her previous interest point, that may lead to a change in the exploration behavior and affect the content delivery system, diminishing the viewing experience of the user. In this work, we have studied how the user exploration behavior changes in terms of the exploration range and angular speed metrics, and we have investigated whether this change of exploration behavior is different when the scene cut is within the same semantic content compared to the semantically different scenes.

We conducted an experiment with 20 test subjects. The experiment consisted of two sets of videos. The first set included eight 20 second videos that were semantically different from each other. The videos were stitched together in a temporal domain using scene cuts. The second set was comprised of three videos with 4-5 scene cuts in each of them. The shots between the cuts were semantically consistent. We collected the positional data of head-mounted displays and converted it into the defined metrics, as per above explanation.