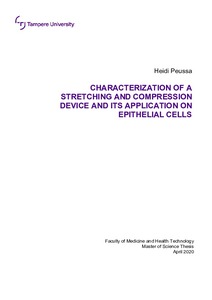 Whether originated from the environment, surrounding cells or from the cell itself, all cells in a human being are subjected to mechanical signals. These signals, along with biochemical and electrical signals, control all cellular functions. Cells sense mechanical signals through a process called mechanotransduction. This allows cells to detect mechanical forces such as compression, stretching and shear stress, as well as the topography and toughness of the substrate. Mechanotransduction can affect cells directly at the protein level or through gene expression, and it affects, for example, differentiation, proliferation, viability and migration of cells.

This Master of Science thesis focuses on a silicone based device designed to apply static or cyclic compression or stretching on cells. The development of this device has been ongo-ing for years, and as the latest advance a new version was designed. The new version is a step toward productization as it streamlines the manufacture of the device. The aim of this thesis was to characterize this new version of the device.

The work can be divided into three parts. First, several commercial polydimethylsiloxane (PDMS) films were compared in order to choose the one that best suits the requirements of the device. This aimed to improve the efficiency of manufacture as well. Then, the stretching performance and repeatability of the device were characterized. Finally, the device was used in cell culture to apply compression to epithelial cells.

Three commercial PDMS films in two thicknesses were compared for their autofluores-cence, optical resolution, biocompatibility and performance in the device. Differences between samples were small, but SILPURAN® (Wacker Chemie AG) in the thickness of 200 µm was chosen. In addition to showing good results in the tested parameters, the film is packed in a user-friendly way and showed no problems in adsorbing surface molecules.

Also several modifications to the current device were tested. The actual characterization was carried out with a device with a slightly expanded vacuum chamber and a stabilator ring that decreased z-displacement. The maximum stretching was 8.6 ± 0.6 % and the undesired z-displacement less than 100 µm. Variation from device to device was 0.6 %-units and repeata-bility within a single device 0.2 %-units. Therefore, the variation originates from manufacture flaws, not the performance of the device itself

Cell experiments were done with Madin-Darby Canine Kidney (MDCK) epithelial cells. One cell line expressed a genetically labeled occludin protein, and thus allowed the inspection of cell boarders in live cells. The other MDCK cell line expressed jRGECO1a, a live calcium indi-cator, and was used to study calcium signaling. After a six day culture period on a statically stretched device, strain was released thus creating a 15 % decrease in cell culture area. Cells were imaged before and after compression. The results show that epithelial cells became tightly packed due to compression. Average cross-sectional area of cells decreased 40 %, thus indicating active rearrangement of the cytoskeleton. Interestingly, calcium signaling de-creased after compression. This was probably a consequence of the tight packing. When cells had smaller space, they had less possibilities to change shape and migrate, which was seen as a decrease in calcium activity.

All in all, the device was reliable and usable in cell culture conditions. However, further de-velopment is required to improve maximum stretching and linearity of stretching, and to make the setup more compact. Additionally, despite the advances in the manufacture of the device, production remains inefficient and calls for improvements.