The Social Outsider: Generating Horror Through External and Internal Alienation in “The Outsider” and “The Music of Erich Zann” by H.P. Lovecraft 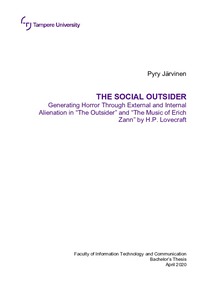 This thesis analyses how alienation is portrayed in H.P. Lovecraft’s writing, and how it is used to generate horror. Furthermore, this thesis argues that the alienation utilised by Lovecraft falls into two distinct categories: external and internal alienation. To demonstrate this, I will analyse the two short stories “The Outsider” (1926) and “The Music of Erich Zann” (1922). These two stories were chosen, because they are representative of Lovecraft’s work, and because they both feature alienation as a central theme.
The theoretical framework of my thesis consists of an introduction to the genre conventions of horror literature, a brief explanation of alienation as defined by Rahel Jaeggi, and Noël Carroll’s theory on how horror literature generates horror through monsters. In short, the monsters in horror literature generate horror by breaking social norms and exploiting the anxieties related to them. This is mainly achieved through making the monster “impure”, in other words, making them somehow categorically contradictive or incomplete. Thus, it is also possible to utilise alienation for this purpose, as alienated people have a contradictory relationship with themselves or the world around them.
The analytical section of the thesis examines how alienation is portrayed through the characters in “The Outsider” and “The Music of Erich Zann”, and whether they are externally or internally alienated. Moreover, the thesis also analyses how alienation is used to make these characters monstrous.
The thesis shows that Lovecraft utilises alienation to generate horror by making the alienated characters somehow monstrous. “The Outsider” utilises external horror, where the character is alienated due to external reason because he is monstrous. On the other hand, “The Music of Erich Zann” relies on internal alienation, where the main character distances himself from the world around them, which in turn makes him monstrous. However, both external and internal alienation contain aspects of each other, as they are both used to examine alienation in general, although they both do so from different perspectives.